What if I told you that there was a vastly untapped market full of potential clients sitting right there in front of you.

A vast untapped market that you've been ignoring.

Up to 3 months ago I was ignoring it as well. Then it caught my interest.

Since I started targeting that audience I've generated around $6000 in sales and affiliate commission,  I've gained over 500 new email subscribers and I've built an audience of 708 people. To top it all I've got new active affiliates onboard who are making regular sales.

You may just think of Twitter as a place where celebs stroke their ego in public or people tell you what they had for breakfast but it's more than that.

The way Twitter works it's possible to fill your timeline with particular types of tweets. So for example, if you are interested in Sports you could focus on "Sports Twitter" or even a particular team.

You do that and your Twitter feed would be nothing else but tweets about your favorite sports team.

I've got Twitter accounts that are all my favorite comedians and authors. And then I have my money Twitter feed.

Money Twitter is the part of Twitter that talks about money, investing in online marketing, and affiliate marketing.

But as in the example I gave above with your favorite sports team I can narrow money Twitter down further.

Can you see how powerful that is? Building an audience of people who are interested in EXACTLY what you are writing about?

The Growth and Sales Process.

The thing I particularly like is that the amount of effort it takes to get followers and subscribers on Twitter is much less than elsewhere. Plus unlike Facebook, MORE people see your tweets than just your followers (Not that FB shows your posts to your followers!) 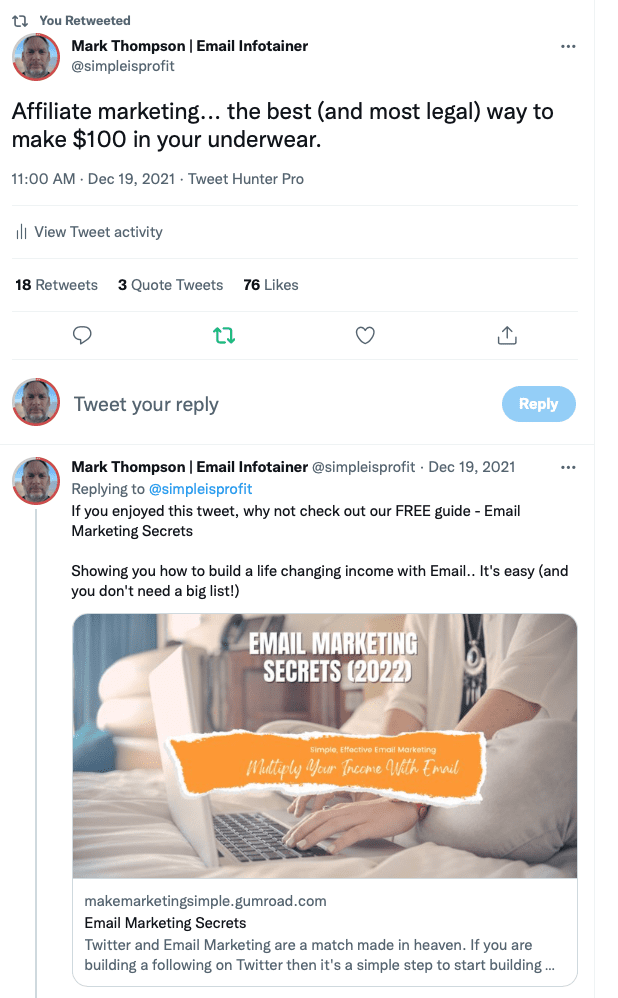 That was a tweet I wrote when I was just starting out but it demonstrates the power of Twitter, at the time I probably had less than 100 followers. 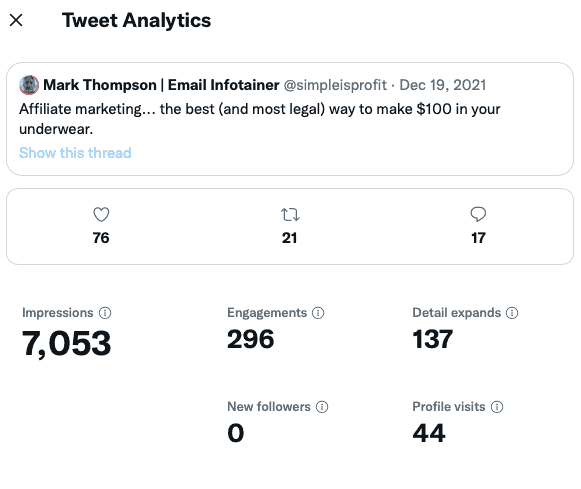 It was shown to over 7000 people and 44 people visited my profile.

Your Profile visits are where the magic happens here they can follow you AND see the link you have in your profile. In my case, that is what I use to build my list.

See how simple that is.

You spend 1 minute writing a Tweet, that gets you followers and subscribers and the more you do it the bigger your account grows and soon it's starting to snowball.

But there is something else when a tweet starts to get traction you can simply add a second tweet to it that promotes your lead magnet or product. Which is exactly what I did with this tweet.

This was responsible for 25 new subscribers in the 24 hours after the tweet.

I hope you can see just how powerful Twitter is!

For too long now we as marketers have tended to write longer and longer articles trying to rank our content in Google and attract readers. First, it was 500 words articles, then 1000, now 4000- 5000 word articles are becoming the norm all at a time when attention spans are reducing.

The trouble is with long-form content the message is lost in all the fluff.

With short-form content, you can put your message front and center in as few words as possible. Tweets take very little time to write,  I generally schedule 4 tweets a day which takes me less than 10 minutes.

Once a week I'll write a Twitter thread which is 5 or 6 linked tweets. Here is an Example  How I went From $7 To 7 Figures

Threads take 20 -30 minutes but are great for growing followers and subscribers as you can go deep into a topic.

Which would you rather do, spend 10 minutes a day writing content that gets to the point and gets followers and subscribers, or spend a few days writing a long article that you hope will get traffic in a few months' time?

If you posted 4 tweets every day and engaged with people on Twitter you could have this happen:

That post is from The Art Of Purpose he started just over a year ago and has built a large account and created some superb products on growing your Twitter account. In fact, his Creation 24/7 is the guide I use to grow my account.

The dates people like AoP started on Twitter are important and are very relevant to those of us just starting out.  Accounts like these didn't really have much traction 2 years ago then people started to realize the opportunity that Twitter gave. From then it started to grow and develop now the word is spreading and we are at the early stages of a gold rush.

Did I mention everything you do can be done for free?

My advice to you?

Go get a Twitter account, look at how others grow their accounts, and target their ideal audience. It basically breaks down to.

• Set Up a Great Profile that will attract your ideal audience.

Finally, if you are interested in growing your business via Twitter, and I highly recommend it, Grab a copy of Creation 24/7 it's one of the top 3 products I've ever purchased. (don't tell AoP but if this was being sold in a mature market like Facebook it would be $399-$499